Cheltenham Surfacing have added to their fleet of vehicles with the purchase of a Scania R420 low loader lorry. A lorry of this kind enables the firm to transport heavier, slower vehicles, speedily and economically to any job that demands this kind of equipment. A vehicle such as the Scania R420 means that Cheltenham Surfacing can respond to client requests anywhere in Gloucestershire, the surrounding counties and even beyond.

Barry Taylor commented on the new addition. “We are delighted with the new vehicle. It is vitally important for larger jobs we undertake that we can transport heavy, specialist equipment, speedily, economically and over reasonably long  distances. This new vehicle fully fulfills that role and is a great addition. Branded in our Cheltenham Surfacing heritage branding it is also a great mobile advertisement for the business”. 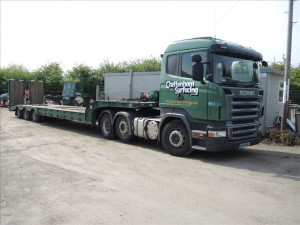 Cheltenham Surfacing’s latest addition to its fleet – a Scania R420 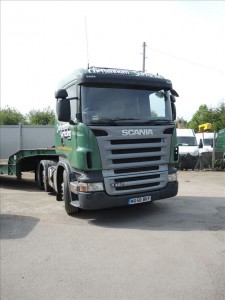