Motorists travelling the busy route between Swindon Village and Bishops Cleeve are now enjoying a smooth new road surface after Cheltenham Surfacing were commissioned by Amey (on behalf Gloucestershire County Council), to re-surface an area beneath the railway bridge in Hyde Lane.

The three days project had to restrict works to between 9am and 3pm in the afternoon to minimise inconvenience to local residents and commuters. The project involved 1,100 square metres of surface being planed off and re-surfaced and approximately 130 tonnes of materials. This photo shows a section of the new surface by the railway bridge. 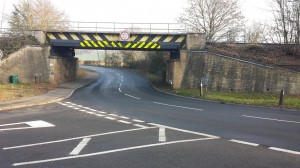